Recently I was in a client review and the client asked about turnover for our large cap strategy. For the record, we average about 35% turnover per year, meaning we hold a stock, on average, for three years.  Compared to peers our holding period is quite long.  The client also asked why we would ever sell a good company.  That answer is simple; our goal is not just to buy good companies, our goal is to buy good stocks.  But the question and the answer beg for a definition.  What defines a good company and what defines a good stock?

An easy definition of a good company is one with sustainable barriers to entry as well as a large and growing addressable market. This kind of company always interests us but does not necessarily make for a good stock.  What is ignored in the above definition of a good company, which is critical to the making of a good stock, is valuation.  Perhaps an analogy would make this clearer.  Let’s imagine you are looking to buy a $1 million home.  Likely, at that price, the home would be quite nice.  If you bought the home for $1 million, it would represent a fair deal, one that is neither good nor bad.  Now, let’s suppose you bought that same home for $750,000.  That would be a good deal.  Those are the kind of homes, or in our case stocks, that we are looking for.

So where do we find those $1 million homes that are selling for $750,000? We believe the best place to look for mispriced stocks is where change is occurring, especially for large, well-known companies.  Let me give you an example.  In early 2005 we bought Hewlett-Packard (HPQ) for our clients.  HPQ was under pressure, as profits were being squeezed in the personal computer industry.  Shortly after we bought the stock Hewlett’s CEO, Carly Fiorina, was fired and Mark Hurd was brought in to run the company.  Hurd had implemented successful cost cutting strategies at the company he ran before coming to Hewlett.  The company, HPQ, had a need for change and the company now had an agent for change.  What the market did not know was whether Hewlett-Packard and Mark Hurd could realize that change.  We did not know either, but because of that uncertainty the stock was trading at a very low valuation.

You might be thinking, is it time to run for the hills? The short answer is, the data says no. Some of that data, as shown below for loans and leases in the United Sates, is one area we take into consideration. As you can see from the chart, Hewlett-Packard’s returns steadily improved from 2005, peaking in 2011. We sold the stock from our portfolio in mid-2010.  Over the duration of our holding period the price of Hewlett’s stock rose 240%.  That is a good stock. 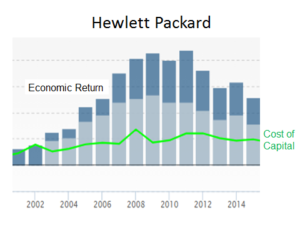 We sold the stock for our clients because we believed HPQ’s growth was not sustainable.  The barriers to entry for personal computer manufacturers were low and falling.  Competition was increasing.  The forces of unrelenting innovation were weighing on the industry and, we believed, would eventually weigh on Hewlett-Packard.  In addition, the perception of HPQ by the investment community had changed, from disbelief in the company’s ability to improve its profits to certainty that profits would remain high.  In other words, valuation had caught up with the improved results HPQ was posting.  For us at Argent, this no longer made HPQ a great stock.

Often the life cycle of a good stock is limited, either by declining prospects for the company or because valuation catches up with the improvement the company is posting. Ideally, we would have no turnover in our strategy.  However, as part of our process, we constantly weigh our assessment of a company’s prospects against its valuation in order to ensure the stocks held in our portfolio adhere to the principles of our change-based approach to investing.