A native Missourian, Harry S. Truman once famously said, “Give me a one-handed economist. All my economists say, on the one hand… however, on the other hand…” What Harry obviously wanted was someone to give him the answer, which, of course, is hard to do. We, at Argent, also wish there were easy answers when analyzing the financial outlook for companies in which we might invest. In order to do that, we look at financial statements and talk to managements to develop a deep understanding of a company’s outlook. On the other hand, we also must pay attention to what is being said externally about pertinent topics, and pay close attention to the direction of the U.S. and world economies. These trends and forecasts help inform our investment decisions and, at times, signal change. Change is the core tenant of the Argent investment process.

As you know, coming out of the Great Recession the economy of the United States was strong relative to other industrialized countries. This had been obviously good for our country, but some could argue it is worrisome over time. Although the U.S. represents over one quarter of total economic activity, the U.S. is not an island unto itself. If other economies, especially of developed countries, were not to also improve, the likelihood that the U.S. economy would slip back into recession increases. Fortunately, recent data indicates that economies elsewhere in the world have begun showing significant improvement.

The chart below-left appeared in the Wall Street Journal on August 23, 2017. According to the Journal, this is first time since 2007 that all Organization for Economic Cooperation and Development (OECD) economies are simultaneously growing. This data is very good news; truly an indication that the U.S. is no longer the lone bright spot in the developed world.

With this data in hand, one might expect investors to embrace stocks which benefit from improvements in the economy. For investors, this means cyclical companies – think banks or manufacturers – firms which need a growing economy to generate higher sales and profits.  While this may be intuitive to some, it is not what we are currently experiencing in the markets today. 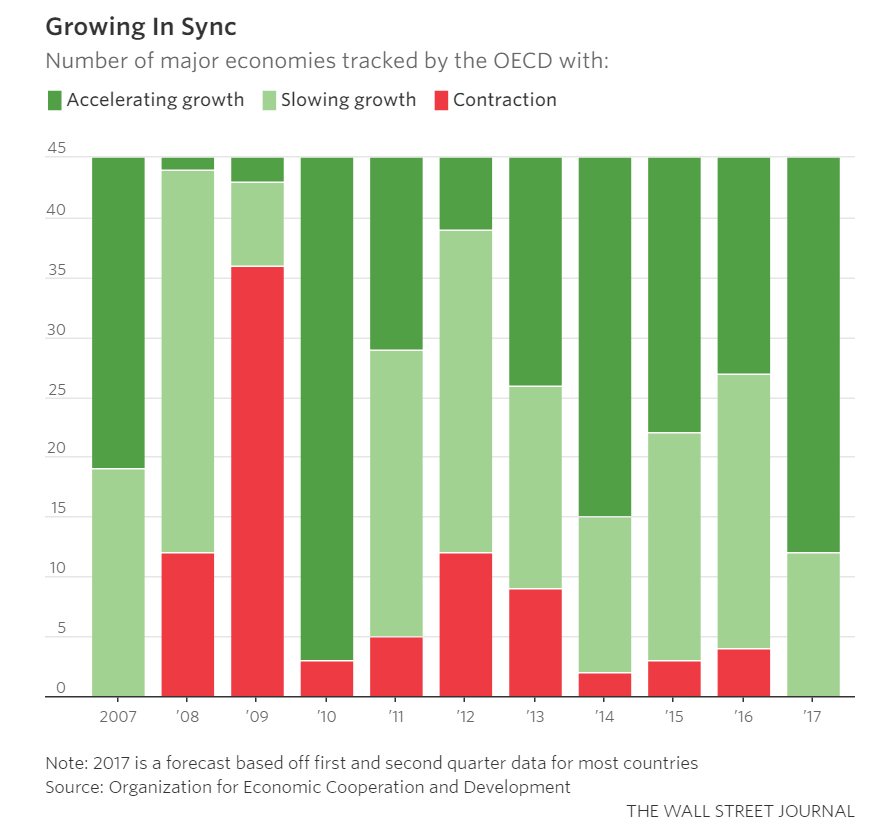 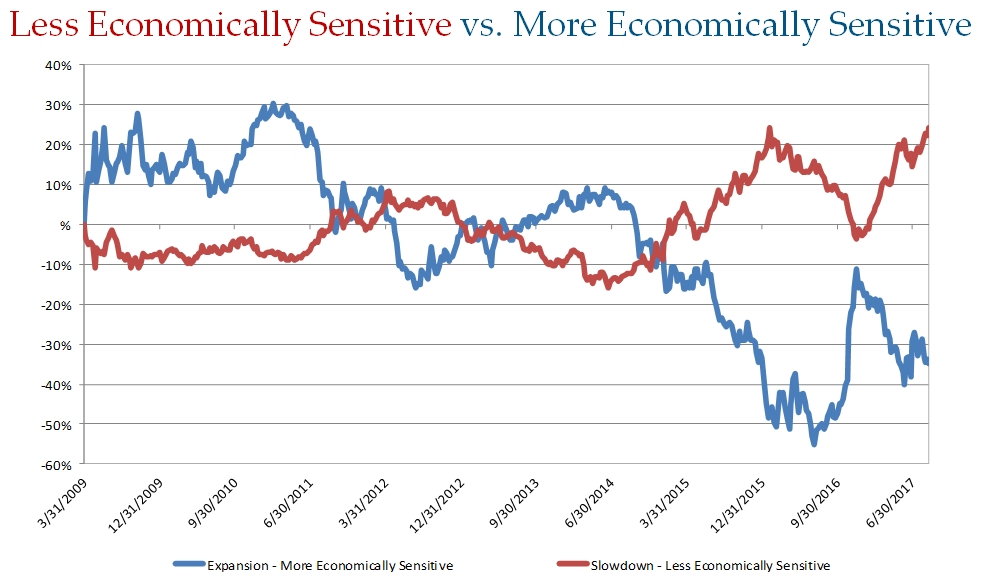 In fact, it is just the opposite. As shown in the chart above-right, investors are rewarding companies that are less cyclical (depicted in red), or less tied to the changing fate of the economy. What does this mean and why is it happening? Is the market signaling that the Trump Bump has been replaced by a Trump Slump? Or…is the market just behind the curve as the world economies continue to improve? On one hand we think that is likely the case, but…..on the other hand, we recognize no one really knows! However, we do believe that the inflection upward in growth of developed economies provides a continued positive backdrop for markets as a whole going forward.