“September saw the reflation trade come roaring back, and it’s likely to have legs in the fourth quarter. By “reflation” I mean expansion, as in expanding economies…..”

Say the word ‘reflation’ and many people likely would look at the tires on their car. For those, however, with finance on their minds, reflation generally means higher prices on goods and services, along with higher interest rates.  Yet even as the U.S. economy continued to grow earlier this year, and while the rest of the world also showed signs of improvement, rising interest rates were as elusive as a properly inflated tire. For years we have been of the belief that if interest rates were to change they would rise.  And for years we have been wrong.

In our mind, a possible return to interest rate normalcy began to occur in September and October, as interest rates did, indeed, rise. The chart below shows the yield on the U.S. 10-Year Treasury bond over the course of 2017.  While the rise in the Treasury yield has been dramatic of late, the question is whether this trend will last–keep in mind that we came into 2017 with the 10-Year Treasury bond yielding 2.45%, above where we are today.

Concurrent with the increase in interest rates was a discussion by the Federal Reserve about how it would begin to shrink its balance sheet, or the assets the Fed holds. Today, the Fed’s balance sheet is approximately $4.5 trillion, meaning the Fed has purchased several trillion dollars’ worth of Treasury and Government Agency bonds in order to create more demand for the bonds than supply – that drives down interest rates.  To put that dollar amount in perspective, before the financial crisis the Fed’s balance sheet averaged around only $800 billion. Now, as the Fed allows some of the bonds it holds to mature without a simultaneous purchase of new bonds, the effect is to reduce demand for bonds, something economists expect to cause interest rates to rise over time.  In addition, in the near-term, most economists expect the Fed to raise short term interest rates again this December.  These changes by the Fed were noticed by the bond market, driving up the interest rate on Treasury bonds. 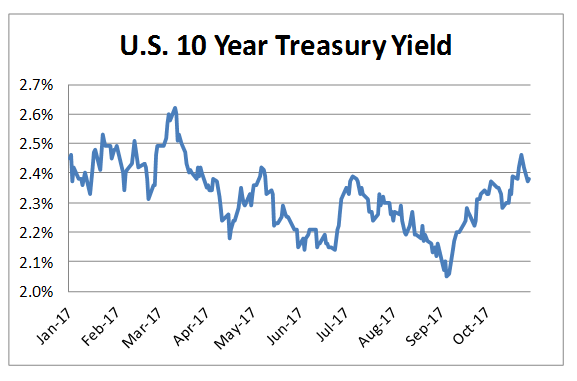 So, as interest rates rose over the course of the last two months, reflation has become a hot buzzword.  To be sure, the Fed has a long, long way to go to get the size of its balance sheet back to an appropriate level.  The more important change, at least in our minds, is that this may represent the true beginnings of a higher interest rate cycle.  Historically, initially as rates begin to move upwards, it is perceived as a reflection of a strengthening economy, and the stock market has rewarded investors.