The market rose in March. That, in and of itself, is not particularly noteworthy. However, given some of the headwinds that unfurled during the month the positive outcome was a bit of a surprise. Some of the negatives were not new. One of those, unfortunately, is the continued war in Ukraine. Another negative, again not new, is the continuing supply chain disruptions, exacerbated by the Chinese Zero-COVID policy, as the country shuts down major manufacturing and export areas including Shenzhen and Shanghai.

The final negative that befell the economy and the markets was new, or at least newish. On March 17, 2022, the FOMC (Federal Reserve Open Markets Committee) voted to increase the federal funds rate from 0% to 0.25%. On the surface, going from 0% to 0.25% is not a big change, but it represented the first time the Fed had increased interest rates since 2018. That change, +0.25%, was expected by the markets, making it only a newish headwind. What was truly new, however, was a comment made by Federal Reserve Chairman Jerome Powell less than a week later. On March 22, 2022, Chairman Powell said, “If we conclude that it is appropriate to move more aggressively by raising the federal funds rate by more than 0.25% at a meeting or meetings, we will do so.” That comment was perceived as much more hawkish.

One of the questions to ask from the Fed’s hawkish comments is where do we go from here? Obviously, the Fed is much more concerned about inflation than it was just a few short months ago when Chairman Powell characterized inflation as ‘transitory.’ President Harry Truman famously said what he wanted was a one-handed economist, because economists would tell him, “On the one hand….and on the other hand….” Unfortunately, as recent volatility in the markets would indicate, that is how the investors seem to be thinking about the outcome of any actions by the Fed.

On the one hand, as the chart below shows, the Fed has never engineered a soft landing in an inflationary period. The chart shows inflation rates, the red dot indicates Fed action, i.e., raising interest rates and the shaded area shows a recession. Inflation jumps, interest rates are bumped and the economy slumps. 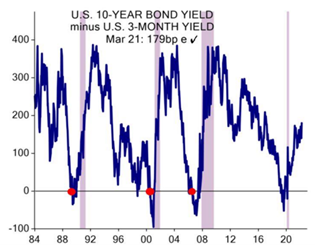 So, two charts with valid data pointing to two diametrically opposed outcomes. With this ‘clear as mud’ picture of the economy what we at Argent will do, as is always the case, is to track any changes in economic data and investor expectations and adjust our portfolios, accordingly, understanding full well, especially in these periods of heightened volatility, that rash actions likely will be wrong actions. Stay tuned.

As a reminder, we are 100% employee-owned and we thank you for your business and your interest. In addition, if you like our market letters, we hope you will pass them on to friends. For information on our five successful equity strategies–Large Cap U.S., Dividend Select, Mid Cap U.S, Small Cap U.S. and SMID Cap U.S., please contact [email protected].